Our roots reach as far back as 1972. Our company was founded on the occasion of the Munich Olympic games to provide VIP and guest catering services in the Munich Olympic Park; at the time. Back then, we were known as “Haberl Gastronomie”. In 2006, the company merged with a young enterprise, Arena One, which had been engaged to provide catering and hospitality in the Allianz Arena in Munich since 2005.

Since then we’ve matured both on and next to the playing fields. Today, we operate with as much confidence in the worlds of culture and business as we do in the world of sports.

Since then, we’ve been the exclusive catering and hospitality service provider for the Olympic Park and the Allianz Arena in Munich. Both these locations serve as the Bavarian base for our expanding company, and have markedly influenced the course of our development. After the 1972 Olympic Games, the Olympic Stadium became the home arena for FC Bayern Munich, and Haberl became its official catering partner. In 2005, Arena One followed the club into its new stadium, the Allianz Arena in Munich, Germany’s most modern football stadium. For nearly 40 years now, this top European club has placed its trust in the hospitality expert’s quality and professionalism.

Besides our sports related activities, since 2005, we’ve taken over the running 32 high-quality staff restaurants for the E.ON Group. Over the last five years, we have also continuously expanded our competence in the sports sector and taken charge of VIP areas at renowned events such as the BMW Tennis Open, the UniCredit Ladies German Open, and the FIS Alpine Ski World Championships, as well as the FIS Alpine Ski World Cup Finals in Garmisch-Partenkirchen. In addition to this, we partnered with the German House at the Olympic Games in Beijing and Vancouver and were VIP caterer for more than 120,000 guests at three stadiums at the 2010 Football World Cup in South Africa. We ended a successful year in 2010 by looking after the VIP area at one of the world’s most famous international ice hockey tournaments, the Spengler Cup in Davos.

Today, we are an internationally active hospitality service provider for arenas, and large-scale sports and cultural events. Our clients, whether stadium operators or event promoters, are hosts who entrust us with their catering and many other guest and event-related services. From consultation and planning to logistics and marketing of their location or events.

Please not that currently our breaking news are only available in German.
If you need further information, please contact us via email.
Thank you for your understanding. 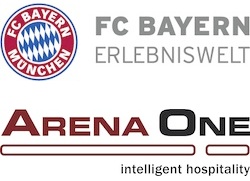